I Smell a Rat...or Mouse

Looking for something delectable to wear for the pollen-ridden spring season!? Well why not quench your seasonal thirst with The Impostor, our latest and greatest creation. Be the first to find the furry jewel among the static feathered fiends and perhaps reward yourself with some ice cream goodness during the increasingly steamy days of May and beyond. Everyone loves a game of find-the-critter, so don't be surprised if your attire attracts a crowd and the occasional cougar for good measure (meeoooooooowww). So after much tribulation we're proud to present the official Filmblazer a.k.a. Two-Week Turnaround Tour a.k.a. Battle Wagon a.k.a. Carnies on the Silver Screen (wait, what?! =) shirt to the masses Lights Camera Traction. This sexy beast is dual-sided, showcasing some of the potential scenes on the chest, as well as illustrating the filming locations (and some creative personalities) on the back. Ye olde epidermis blocker comes on gold for the gents and the lovely coral for the ladies. By the by, if you're asking yourself 'what's the deal with this shirt?!', stop sticking your nose into our business buddy (snicker). I jest, we actually met up with the legendary Joshua Mills at a Twitter event (uh yeah, they really do exist) and we decided to help each other out. Let me also add that I'm totally envious of the seven month, x-country, movie excursion that he (and his evil cohort =) is embarking on. Keep living the dream and remember to occasionally check the air pressure in your tires (to increase fuel efficiency of course). This just in...the Fuzzy Ink amigos will be gunning for the sunny sights of Hotlanta (Atlanta) as we were just accepted to The Indie Craft Experience (ICE), a super fly outdoor event showcasing some neato new products and (I can only assume) cool arse peeps. It's a weekend extravaganza, so grab your sleeping bag, Snuggie (or Slanket) and a decent flashlight (for the ghost stories, duh) and spend some quality time with us. Invisible doors open at 11am both days...and slam shut at 7pm sharp. Should be a dilly of a time...


...Be on the lookout for our partner in crime Eric Terry as well, who will be boosting his crazy cool Linty Fresh gear

So the brother and I took a trip out to the country to see some friends and relatives visiting North Cackalacky and it just so happened I brought along my camera. Now let me preface this brief conversation by spilling the beans that I'm indeed an animal lover (with cats taking the helm), but staying as mutual and unbiased as possible, I gotta say my cousin has some pretty stupdendous pets!!! Take a looksee at some of the money shots =) I was able to capture with my accidental (if any) talent... Here's Lucky looking all hot and bothered (don't judge me) JD (Jack Daniels) playing it cool for the camera (is he not the perfect match of Fatcat from Rescue Rangers?!?!)...he seriously tips the scales at 25 lbs An Alley in Richmond So yesterday John and I made a quick night trip to Richmond, VA to check out the lyrical stylings of four bands involved in the Inaugural Stache Bash tour (the brainchild of one Jay Della Valle) hosted @ Alley Katz. We had previously linked up with Jay at a Stache Bash event in St. Louis and after having an interesting chat, we figured our objectives were similarly aligned to cross-promote. Anyways, the show went off without a hitch, aside from the fact that the curtains closed at 11 pm (apparently there's some silly noise curfew in the area), easily contributing to the lackluster audience turnout. Outside the pearly gates of the venue; this place is extremely conducive for kick ass shows with available multi-tiered viewing, but again the shotty curfew must be costing them some critical attendance Conshafter doing their thing; they had a very unique sound and I wouldn't be surprised if they found themselves back in the limelight in the very near future Della Valle rocking our socks off; Jay, seen here pointing out his next lay, ended the night in a testosterone-soaked wife-beater...such a dreamy entertainer =P


Not pictured, but very much a part of the solid show, were The Rulers (not particularly my cup of tea, but crazy good entertainers nonetheless) and Louisiana Territory (showcasing a refreshingly upbeat vibe, with more sombre and softspoken vocals).


Great time had by all and thanks again to Mr. Jay Della Valle for letting us take part in his tomfoolery.

No Sleep 'Til Brooklyn

We're very excited to announce that...(drum-role please)...we've been accepted to the 5th annual Renegade Craft Show in Brooklyn, NY. We'll be loading up the Mustache Mobile and road-tripping it to the big apple. Although we've been in some smaller scale shows in the past, this will def. take the cake in terms of mainstream exposure, vendor interaction and overall splendiferousness!? The show will operate June 6th and 7th (11am - 7pm) @ Mccarren Park and will house some amazing crafters from around the U S of A (as well as probably some international talent). If you happen to be in the area, we'd love for you to swing by to share some chit-chat and memories passed.

Blowing Out the Candles

It's that time of year when the boys of Fuzzy Ink add another hair to the mustache, or for those of you who are follicularly challenged perhaps another ring to the tree is a metaphor better suited. Whichever the case, we're collectively celebrating our 27th (John/Mike - April 10th) and 26th (Justin - April 13th) birthdays and thought it quite fitting to showcase a tasty treat that was created by one of the mothers of Fuzzy Ink. 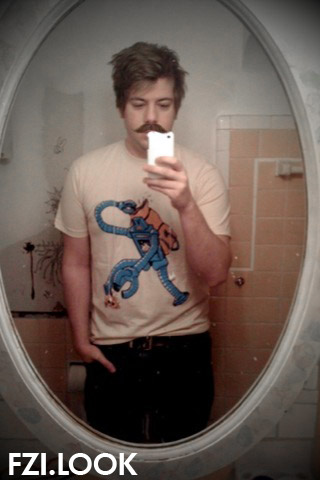 Through the looking glass, with Torchbot 3000

Not only do I love seeing pics of our gear out there in the real world, but I love this picture. It could be the crude lighting, the vintage oval mirror or whatever the f*ck is happening on the wall in the background, but it's good stuff.